Wrap-Up of the Month

Since I didn't get to blog much this month, I've decided to post a wrap-up of things that happened in October. I think that I will have to cut down the blogging to once a week, though, because I want to post posts other than book reviews and need some time to come up with them.

So on the buying side, I bought a book!
Which is news because I usually don't buy books. They are rare and beautiful and NO you cannot borrow them. Sorry, but I am very protective. :) 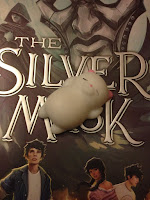 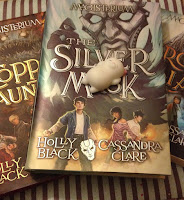 I have also discovered a squishy cat (which I ordered last month, but I never pointed it out here like I wanted, so here you go). See two of the pictures above, where it is center stage. Also, here is the link if you are considering purchasing one (It's very adorable. And also squishy.)

On the Halloween Side, I dressed up...
...as Cameron Anne Morgan! In case you do not know who she is (see my book review), she is a super awesome spy-in-training from the Gallagher Academy For Exceptional Young Women. For this costume, I decided to wear a casual blazer, white shirt, stockings, and a black and white skirt. I really wanted a pin on my shirt to explicitly state that I was from the Gallagher Academy, but the only pin I had was for Disney Princesses, which I decided to avoid for the time being.

On the reading side, I read about five books!
*Sigh*
Hopefully, November will be a better month. Though I'm not sure, because NaNoWriMo is here and I don't have an idea yet...

So what have you been up to this month? What did you dress up as for Halloween? Have you read as much as you've liked? Has October been busy or relaxing? Tell me below!