Review: The Weight of Our Sky by Hanna Alkaf 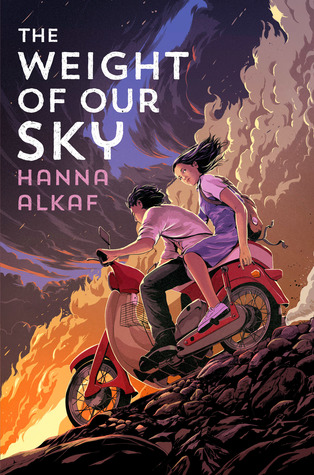 The Weight of Our Sky by Hanna Alkaf

A music-loving teen with OCD does everything she can to find her way back to her mother during the historic race riots in 1969 Kuala Lumpur, Malaysia, in this heart-pounding literary debut. Melati Ahmad looks like your typical moviegoing, Beatles-obsessed sixteen-year-old. Unlike most other sixteen-year-olds though, Mel also believes that she harbors a djinn inside her, one who threatens her with horrific images of her mother’s death unless she adheres to an elaborate ritual of counting and tapping to keep him satisfied.But there are things that Melati can't protect her mother from. On the evening of May 13th, 1969, racial tensions in her home city of Kuala Lumpur boil over. The Chinese and Malays are at war, and Mel and her mother become separated by a city in flames.With a 24-hour curfew in place and all lines of communication down, it will take the help of a Chinese boy named Vincent and all of the courage and grit in Melati’s arsenal to overcome the violence on the streets, her own prejudices, and her djinn’s surging power to make it back to the one person she can’t risk losing.---**Content warnings: Racism, graphic violence, on-page death, OCD and anxiety triggers.**

Auntie Bee regards him through narrowed eyes for a minute, then decides to let it go. "Did you eat?"

Vincent snorts. "We're in the middle of a riot and you can still ask me if I ate?"

The day I gave my mother back her light, I vowed I would never let her know my darkness again.

He sits down on the edge of the bed and picks up the band, smoothing it against his knee. "I can do more for our people by taking up supplies instead of sticks," he says quietly. "I'd rather help with the healing than the hurting."

Frankie shakes his head. "Then you're too far gone to realize that your helping is what's hurting us."

Overall Thoughts
I feel like OCD is pretty underrepresented in YA in general, so we need more books like this! The unique setting also made this book special, and I also enjoyed the style of this novel. I give it 4.5/5 stars!

So what did you think? Are you excited to read The Weight of Our Sky? Do you know of any other good OCD rep in YA? Tell me below!
By Nushu Shri at February 03, 2020 No comments: